Where Ideas Come To Life 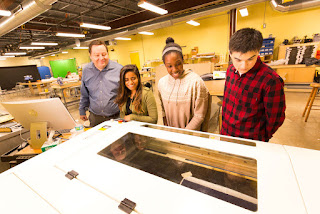 The IdeaLab in the lower level of the Richard B. Fisher Middle School seems cavernous – nearly 90 feet long and plenty wide with high ceilings, bright lighting and ample elbow room among the worktables, storage and snazzy equipment.

There’s a 3D printer in one corner, two more farther down the room, and a laser cutter in a prominent spot. Oversized exhaust hoods and high-powered ventilation keep the soldering table and other work areas free of fumes. There are safety locks on power saws, and electrical cords roll up out of the way when not in use.

It’s a great space, but that’s not the main thing.

“What we’re aspiring to do is to give our kids spaces for creation, collaboration, communication,” said Corey Kilbane, IdeaLab coordinator and Upper School chemistry teacher. “We want it warm, welcoming, where anyone can come down and work on their idea.”

David Brightbill, academic dean for curriculum and professional development, described the opening of the lab – the soft rollout began in the fall of 2015 – as “an opportunity to rethink the learning experience, to really go beyond what’s happening in the classroom.”

The focus on doing, creating and problem solving “is much more a hands-on approach, where students are producing something that shows that the learning has taken place as opposed to just regurgitating facts on a test,” he said.

Teachers are being trained to use the new technology and urged to think about how what they’ve learned might be applicable to the courses they’re teaching. “There is an expectation that all departments will at least be considering these opportunities,” Brightbill said. 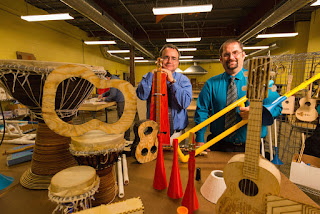 Instrumental music students have been studying the physics of sound and instrument design by building PVC or plywood versions of their instruments in the lab. The effort is a result of a VITAL summer professional development grant that funded a research collaboration between Brad Ford, Upper School music teacher, and Tim Clarke, Upper School science teacher.

Players built rudimentary trombones, for instance, using PVC piping cut to size and plastic mouthpieces shaped by a 3D printer (also used to create bright blue bells for the horn). Changing the interior shape of the mouthpiece has an effect that the students can discern as they play.

“The long-term goal is to play with the shape and see the effect on the tone,” Clarke said.

“We try things out, we learn from our errors,” said Ford. “And students get a better understanding of the instruments they play.”

Trombone player and sophomore Cole Frieman agreed. “It’s so cool – you put the pieces together and, oh, it’s an instrument now,” he said. “To build it, you really have to learn about the instrument, more than just knowing how to play it. We’re building mouthpieces right now and Mr. Clarke will ask, ‘Does it feel right? How does it feel different?’ It’s amazing.”

Fabric Design
Upper School theater teacher Eva Kay Noone learned how to operate the laser cutter and the 3D printer along with the software programs during a VITAL professional development week in the summer of 2015.

“My brain was ready to explode!” Noone exclaimed. The task, she said, then became finding ways to apply what she had learned. “I gravitated more towards the laser cutter because I was thinking about wearable art and how to marry what I call old-style skills, like the sewing machine, like needle and thread, with the modern laser cutter. Plus, I was seeing all these beautiful fashions that were coming out with laser-cut designs,” she said. 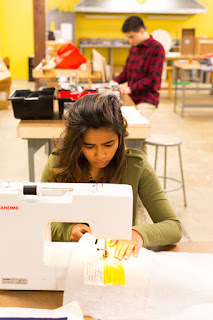 Noone’s brainstorming for her costume design course resulted in an eye-catching project, Hawaiian reverse-applique fabric design. Students each created a snowflake-like pattern, photographed it, and sent the image via email to Kilbane, who helped them laser-cut each image on white cloth. They then used old-school technology – sewing machines – to complete their work.
Junior Priya Ahmad documented the process on video. “It was fun. I got to learn how to use a laser cutter and how to do some of the computer stuff that comes with it,” Ahmad said. “I’m a hands-on type of learner, so it was nice to see my project come to life.”

Noone said fall semester’s end-of-course project would involve repurposing used materials into a costume. IdeaLab resources, she said, “open the door” to all sorts of possible creations.

The extra space and the new technology have transformed two mainstays in the science realm: the eighth-grade Physics 500 boxcar project and the Upper School bridge construction project in Advanced Physics class.

Physics, Then and Now
Previously, students would spend hours manually cutting the parts for their vehicles, including wheels, with little chance to test for durability before the big race down the incline by Graham Athletics Center. One, maybe two cars would make it to the finish line. Last spring, there were six, and they went faster and further than in previous years. With teachers running the laser cutter, students had glued layers of cardboard together to create perfectly round wheels, and they had plenty of time left to test for sturdiness and refine their cars.

Previously, bridge building was a lengthy, tedious, sticky project, with students having only one chance to test for strength and structural weaknesses. Now, students design their bridges on their MacBook Airs, do some testing virtually, then have the components laser-cut to size before fastening the pieces together for testing.

“Instead of building one bridge over two weeks, they’re making five or six,” Kilbane said. “With the traditional project, you would just write up your results, but science is all about coming up with the thing, testing, evaluating, refining. That’s what they’re able to do now.”

The designs, he said, have become “more intricate, more efficient, and the kids can reflect on the process at every point along the way.”

Brightbill was equally enthusiastic. “It’s more like what would happen in real life, in the industrial world,” he said. The kind of testing that an engineer would do “they are doing now as juniors or seniors for their physics class.”

Current projects lean toward STEM – science, technology, engineering and math – but the space is designed for STEAM – the A is for art. There’s a green screen for shooting video productions next to a space reserved for testing robots, next to shelves stacked with the parts of the ersatz saxophones. Noone’s project is an example of how faculty from all departments can use the space.

“A lot of us see things as pretty siloed, with particular rooms and spaces belonging to certain people. But we wanted to create a space that is really inclusive,” said Kilbane. 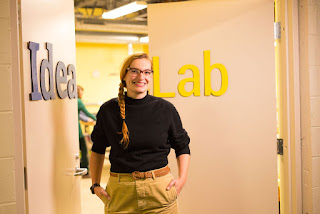 Since PC acquired its first 3D printer, Kilbane has sought to make curricular connections outside of science. He began by partnering with the Smithsonian 3D Digitization group to bring artifacts from its network of museums into the classroom. He later spent a summer as a teacher associate at the National Museum of American History to explore hands-on approaches to combine history and science.

More than a Makerspace
Kilbane’s role in the PC IdeaLab is pivotal. He views the lab as a sort of library, one with a supersized toolbox of resources. “I’m becoming a part-time librarian, if you will. I’m there to show people how to use the tools, how to use the space, to keep it organized.”

Clarke said having a person who is passionate about the space and has the knowledge to make things work is critical. “Corey is enthusiastic,” Clarke said. “He makes a conscious effort to pull people in. The goal is not just to draw in engineering and science people but for everybody to consider it a space they can use.”

The IdeaLab itself was born through a VITAL grant awarded five years ago to Kilbane, along with librarian Doug Uhlmann in Gummere Library and Sheila Ruen, chair of visual arts at the time, according to Brightbill.

“Architecturally, ours is definitely not one of the fanciest of spaces, but it definitely has the space and tools that kids need to really get the work done,” said Brightbill. “A lot of times these types of makerspaces are very much a part of the science program, but that’s not the way we see it at all. We’re looking at it much more holistically.”

The opening of the lab spurred a rethinking of all the creative spaces across the Penn Charter campus, from the art studios, to the music rooms, to the digital photography lab, to the woodshop in the Lower School. Brightbill now thinks of them collectively as IdeaLab spaces.

Kilbane concurred, saying studios and equipment should be considered a shared resource no matter where they are situated. “With all these creative spaces – what classes might use them? What tools do they offer?” he asked. “It reflects that whole Quaker ethos – finding that light of inspiration in every place we can.” 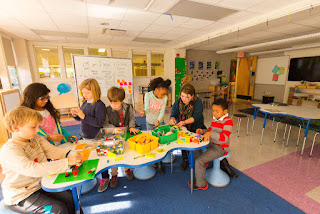 The Lower School opened its own, smaller IdeaLab space this fall, run by Christina Brennan, Lower School technology coordinator. “It’s a robotics, engineering, arts, science kind of space with technology imbedded in what we do,” Brennan said. One project: designing a miniature chair that might suit Iggy Peck, the boy architect with fanciful ideas in a children’s book by that name. Working in groups, the students constructed their chairs using molding clay and pipe cleaners.

Over time, the use of this new Lower School IdeaLab will provide students with more opportunities for inquiry-based, hands-on learning. Gradually, they will learn design thinking, technology and basic coding skills that will provide a foundation for learning in Middle and Upper School.

Walking through the Middle and Upper School IdeaLab, Brightbill considered the big picture. “We see this as a catalyst for curriculum change,” he said, surveying the room. “It’s not just the space itself, but more importantly it’s building connections between students, between teachers … departments … divisions. It’s really an opportunity for us to rethink the learning experience.”
The mantra of IdeaLab enthusiasts seems to be: Try it, you’ll like it. 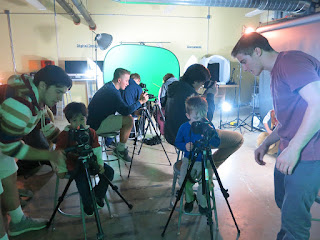 “I love meeting with students down here,” said Kilbane. One group visited with questions about chemistry and density. “As soon as they got in the space, they started asking questions and asking can they do this, can they do that,” he recalled. “It’s just a matter of getting students in the door.”

Frieman, the trombone player, had exactly that reaction. “I love the lab,” he said. “It gives you a place to be the most creative you can be. If you have an idea, and you want to go do it, it gives you all the tools you need.”

This is a moderated blog for a public audience. Constructive comments are welcome.

Thought & Practice is intended to share information and inspiration as we work to implement our school's new Strategic Vision, "Educating Students to Live Lives that Make a Difference."
We are committed to the vision and excited by the possibilities.
Our plan for Penn Charter's future is organized around six goals, each with a set of strategies:
Goal 1: Quakerism
Goal 2: Content/Program
Goal 3: Teaching
Goal 4: Time
Goal 5: Space
Goal 6: Financial Sustainability